In 1801, the name of William Miller first appeared in the Handbook of the Hamburg Stock Exchange. William Miller, born in Perth (Scotland) 1767, had moved to Hamburg at the end of the 18th century to arrange customs clearance and sales on behalf of the Scottish fishing industry. However, he soon began to diversify his activities to various areas in the shipping business. After he died, August Bolten was his successor who took over the sole control of the business in 1841. The company really began to expand with the advent of steam powered vessels. August Bolten was one of the first to recognize the potential of a reliable shipping line. He co-founded the Hamburg-America (1847) and Hamburg-Süd (1871) shipping lines and became their representative. Bolten also represented a number of other German and foreign shipping lines. Following World War I and post-war inflation, the German flag was one of the cheapest to sail under. Consequently, a large number of Swedish ship owners registered under the name of Bolten. The company gained expertise in operation and chartering of ships during this period and managed to build up its own fleet. This experience proved to be valuable. In World War II the total fleet was lost and the company was forced to start new activities. Only in 1951 Bolten took delivery of its first new-building MV “August Bolten” which was entered into the North Sea and Baltic Sea trade. During the 1950ies and 1960ies further new-buildings were brought into service. To add to its tramp shipping activities, Aug. Bolten co-founded the TT-Line in 1962 and remained a stakeholder in this privately-owned RoRo/passenger ferry service between Germany and Sweden for 50 years. 1968 the MV “Bärbel Bolten” (140 TEU) was the first German container vessel. In the 1970ies Bolten was one of the largest car carrier operators in Germany.

Over the decades, the dry-cargo fleet has been renewed and increased and the range of Aug. Bolten’s activities has expanded continuously. Nowadays, the Bolten group operates a modern fleet of bulk carriers of approx. 24,000-39,000 tdw, i.e. handy-size bulkers. The vessels are either own tonnage, chartered or managed vessels and are trading world-wide 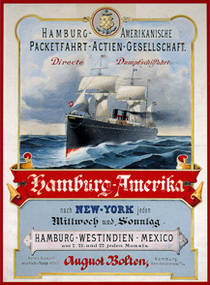